A downloadable game for Windows and macOS

Ryn is back home after a colossal screw-up. With her parents busy looking after her dying grandfather, Ryn is all alone with both her thoughts and some severely overgrown garden statues. But digging into the yardwork might be just what she needs to get through some tough feelings.

Made by Brendan McLeod and Garrett Steele.

Developed in Unity in Austin, Texas.

Music arranged and performed by Garrett Steele.
Additional contributions by:

Didn't cry at the end. Definitely cried a few minutes after, when it all settled in.

I don't know If I'll revisit the game (or really, if i need to revisit the game), but you had a story to tell and it was absolutely worth telling. "Redemption" in fiction is such a heavy concept these days; A lot of people focus on whether an action is too terrible to forgive. Simply choosing to be better than the person you were yesterday is probably the best thing you can do for yourself and others.

I think there's a lot we can learn from the classics, as well as stories like this. Thank you.

Thank you for making this, I loved it. it's really beautiful and touching (I had tears in the last sequence 😢)

finding yourself is never worthless, always worth the cost.

thank you very much!

I like this game a lot, and I'm good with the vagueness! So many stories are overexplained. I was worried about playing this game because simple games usually don't work for me, but I was pleasantly surprised and also I REALLY teared up.

Thank you so much!

Hey, played through the game this arvo, thanks for making it! I did a small write up on my site for the game: http://www.pressplaygaming.net/articles/2020/7/19/12-labors

I just played the game, and I loved it! The balance of moving and funny was perfect. Best game I've played from the Racial Justice bundle so far. I just had to come here to ask.... is Ghost Horse a My Brother My Brother and Me reference?

Thank you so much! Our ghost horse is not a deliberate reference or callback to MBMBAM, but I like to think it shows a shared appreciation for spectral horses.

It brought me a lot of joy both on its own and in connection with MBMBaM! Literally laughed out loud. Keep up the good work!

A nice way to spend thirty minutes. The narrative had me intrigued, and i liked clearing away the moss and stuff-felt kinda gratifying. My only recommendation is maybe just a little bit more backstory, although one can also kind of fill in the blanks using what's given. A good game for when I'm feeling down (it DOES have a good ending)

I don't think the horse was that ugly.

Neither did I, to be honest. Thank you for playing!

I liked this game a lot. The parallels between Hercules and Ryn are obvious to people who know the myths, but not overly forced. There's some thought-provoking parts on the nature of forgiveness, and despite the game being a short one I did feel warmly towards Ryn.

Thank you very much!

Lovely story <3 Short and sweet, with a lovely conclusion. I really enjoyed it, it was very calming  :)

Thank you very much, and thank you for playing!

Just played the game, and I have to say that although it had some nice sentiments, the monologue felt too generic. I don't know if this was based on an actual real-life person or events, but because the "colossal failure" itself was never mentioned in detail, I feel like there was no real closure for me. As I did not know what the back-story was in the first place, I guess I was unable to relate on an emotional or rational way to *why* they were feeling the way they were, and how the ending was a bit too abrupt. Don't get me wrong, I will say I have felt like this in my life, when I was younger, so the monologue was poignant, and I understand if your reasoning behind being vague was to convey a slice of life story rather than evoke specific or harrowing events to spur relatable memories or emotions in the player. [sidenote - played on Mac with no issues]

Thank you very much for playing.

Hey, sorry if my post was a little negative, I didn't mean to come across like that. I appreciated the experience :)

Oh, I didn't take it that way, but thank you anyway! 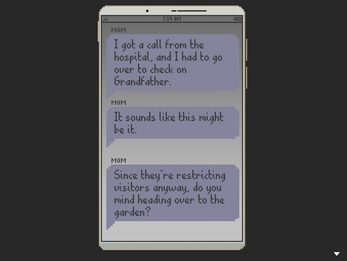 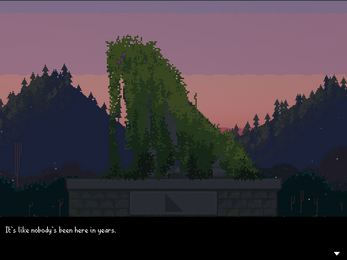 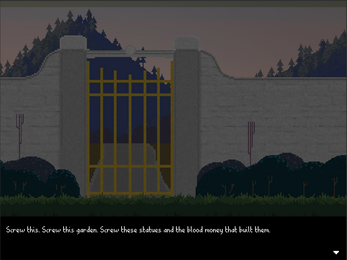 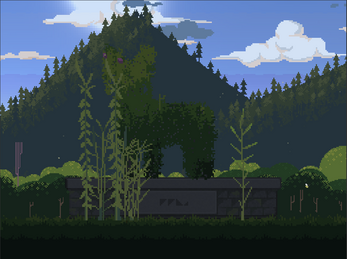